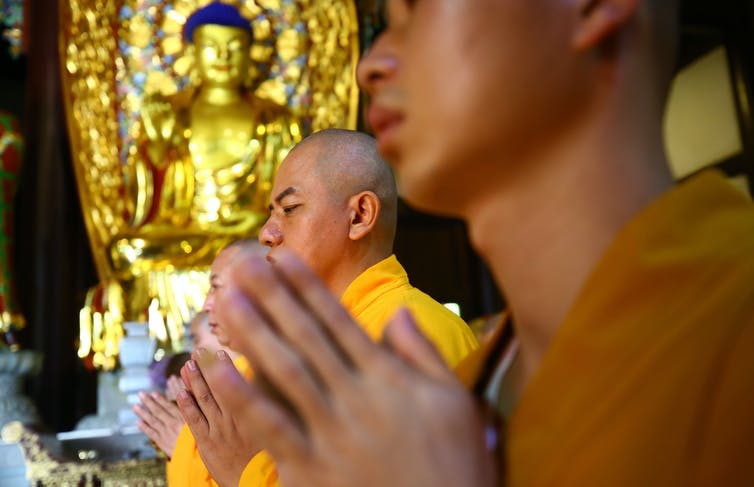 What is Pure Land Buddhism? A look at how East Asian Buddhists chant and strive for buddhahood

Many people in the West interpret Buddhism as a path of meditation leading to enlightenment.

What many may not know is that this interpretation differs vastly from its practice in East Asia.

I have spent many years observing Buddhist temples in Taiwan and mainland China, and my research culminated in the book “Chinese Pure Land Buddhism.” This form of Buddhism teaches people to call upon a buddha named Amitābha in the expectation that when they die he will take them to his pure buddha-land, an ideal place to pursue the practices that will lead them to become buddhas, or fully enlightened and liberated beings.

This form of practice – central to Pure Land Buddhism – arose from Mahayana Buddhism, a branch of Buddhism that emerged in the first to sixth centuries A.D.

One of the innovative teachings of Mahayana Buddhism was that the cosmos is inhabited by millions of buddhas, not just the historical founder of the religion. Since all these buddhas had to reside somewhere, and their environments had to be as pure as they were, it followed that there are many buddha-lands.

Pure Land Buddhism taught that the pure land of Amitābha was accessible to regular people after they died. Prior to the development of Pure Land Buddhism, the only way to enlightenment lay through an arduous path of study and practice that was out of reach for most people.

In China, the Pure Land teaching made the prospect of liberation from suffering and the attainment of buddhahood feasible for ordinary people. While Pure Land Buddhism spread and became dominant in other East Asian countries, China is the land of its birth.

The theory of karma

Buddhists believe that all living beings are stuck in an endless loop of birth and rebirth and the good or bad fortune they experience results from karma. Karma is a moral force created by the deeds one does: Virtuous deeds give one better fortune, while evil or even just ignorant deeds bring misfortune.

Karma is said to determine the future life in terms of gender, intelligence and other personal attributes as well as one’s environment.

As a buddha is believed to have completely purified his karma, his body and mind are free of all defects and the land he inhabits is perfect. Several Buddhist scriptures describe “buddha-lands” as paradises with no moral evil and free of all taints.

Many Buddhists hope for birth in a buddha-land so they can complete their path under a buddha’s direct supervision.

According to the Sutra, or scripture, on the Buddha of Infinite Life from no later than the third century, a monk named Dharmākara resolved to become a buddha. After much study and deliberation, he made 48 vows that detailed what kind of buddha he would be and what his buddha-land would look like.

Most of these vows laid out a scene familiar to believers: As a buddha, he would be powerful, wise and compassionate. His land would be magnificent, and the beings who shared it with him would be so accomplished that they would already have many of the powers and attributes of a buddha. These included perfect eloquence and the ability to see and hear from great distances.

But among the vows recorded in the Sūtra, it was the 18th that changed everything. This vow stipulated that anyone who merely brought him to mind before death would be reborn in his buddha-land:

“If, when I attain buddhahood, sentient beings in the lands of the ten directions who sincerely and joyfully entrust themselves to me, desire to be born in my land, and think of me even ten times,” Dharmākara is quoted as saying.

The fact that he realized his goal and became the buddha named Amitābha meant that the vow became reality. However, the term “ten times” referring to thoughts of Amitabha was vague. Another scripture, the Sutra on the Visualization of the Buddha of Infinite Life, clarified that one had only to say this buddha’s name ten times.

In addition, Dharmākara had also said that those who “commit the five grave offenses and abuse the Right Dharma” would be excluded. This Sutra eliminated such restrictions. The two scriptures allowed ordinary Buddhists to aspire to a rebirth in this Pure Land.

Buddhism entered China around 2,000 years ago and developed a following slowly as scriptures became available in translation and missionaries learned to communicate their message.

The story of Dharmākara’s vows proved especially popular. The Sūtra on the Buddha of Infinite Life was translated into Chinese several times, and scholar-monks lectured and commented on the Pure Land sūtras.

Monks and nuns chanted the Amitābha Sūtra during their daily devotions. This sūtra, along with the two already mentioned, became the “Three Pure Land Sūtras” that anchored the emerging tradition.

The earlier Chinese commentators on these sūtras held that one needed great stores of good karma from the past to even hear of these teachings. They also preached that if one’s mind was not purified through prior practice, then one could not see the Pure Land in all its splendor.

[Deep knowledge, daily. Sign up for The Conversation’s newsletter.]

In the sixth and seventh centuries, three monks named Tanluan, Daochuo and especially Shandao provided new interpretations and practices that gave the ordinary believer complete access to the Pure Land without them needing to earn or deserve it.

First, they said that rebirth in the Pure Land is an “easy path” compared to the “difficult path” of traditional Buddhist practice.

Third, they defined the main practice as calling Amitābha’s name aloud. In the original texts it was not clear whether the practice consisted of difficult meditations or oral invocation, but they made it clear that just repeating “Hail to Amitaqbha Buddha” would cause the buddha to transport one to the Pure Land.

The Pure Land was not a final destination, like heaven in Christianity. The point of rebirth there was to be in the perfect environment for becoming a buddha. One would still need to strive toward buddhahood, but one’s own power with that of Amitābha would guarantee the final result.

Think about being on an escalator. If one cannot walk at all, it will carry one to the top, but if one can walk even a little, one’s speed will combine with the motion of the escalator to get one there more quickly.

Pure Land believers may recite “Hail to the Buddha Amitābha” silently or aloud while counting the repetitions on a rosary; they may participate in group practice at a local Buddhist temple; they may even take part in one-, three- or seven-day retreats that combine recitation with repentance rituals and meditation.

This remains the prevalent form of Buddhist practice in East Asia to this day.

The Catholic University of America School of Theology and Religious Studies is a member of the Association of Theological Schools.

This article is republished from The Conversation under a Creative Commons license. Read the original article.

0 comments on “What is Pure Land Buddhism? A look at how East Asian Buddhists chant and strive for buddhahood”